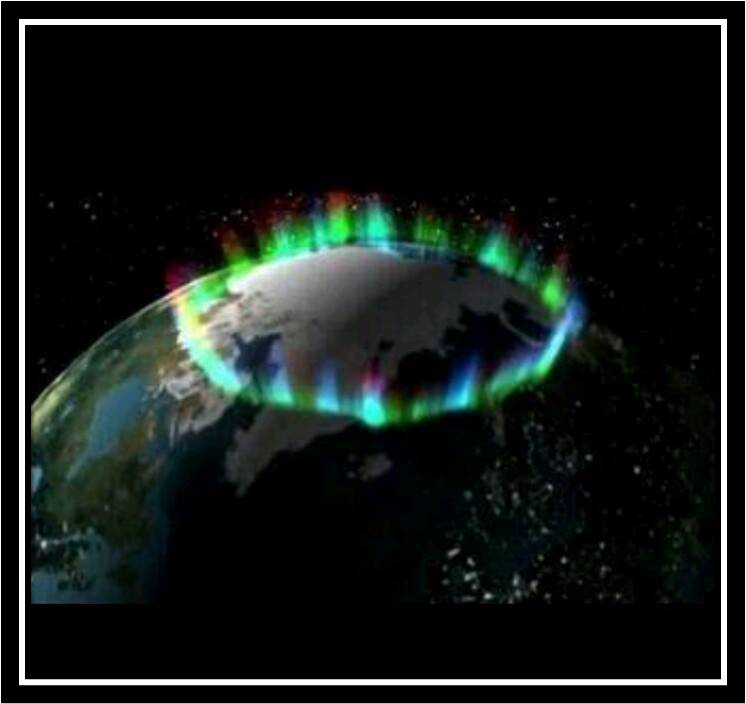 An extraordinary photograph taken from a satellite shows the Arctic ice cap inside a magnificent ring of Aurora borealis, the northern lights.  The ice cap in winter reaches deep into the northern islands of Canada; it wraps over the top of Greenland; and it touches the northern coast of Russia.  The ice cap curves from the light of the sun . . . to the dimness of night.  Outside of the ring, on the night side of the planet, we can clearly see the lights of European cities.

This gently curving cap of ice, as thin and fragile as an egg shell (it is only a few meters thick), has been reflecting most of the sun’s light on the top of the planet for eons of time.  The ice has thus kept both the ocean below it, and the atmosphere above it, cold and stable.

But the pollution from our burning of coal and oil during the past two hundred years has wrapped a blanket of carbon around our planet, a blanket which holds in the heat from the sun.  The warming atmosphere warms the oceans; the warming Arctic Ocean warms the underside of the Arctic ice cap, and thus slowly melts the ice; the melting ice both shrinks in surface area and becomes thinner, more fragile.  The shrinking ice cap reveals more and more open water, which absorbs more and more sunlight, which heats the water, which melts the underside of the ice.  This entire process is now accelerating, so that the ice cap melts more and more each year.

As the Arctic Ocean warms, the winds which blow over the surface become warmer.  They in turn warm the land surrounding the Arctic Ocean.  The permafrost, a sheet of underground ice which is a remnant of the last ice age, now thaws, releasing ancient gases—carbon dioxide and methane—which had been trapped beneath the ice since before the last ice age.  Both of those gases are greenhouse gases, especially methane.  As they now rise into the atmosphere, they add to the blanket of carbon, and the heating of our planet accelerates.

In addition, as the Arctic Ocean warms, the Arctic atmosphere warms, thus weakening the jet streams which circle in their zigzag pattern around the polar region.  The jet streams directly affect the weather in the lower latitudes.  As they weaken, their zigzags become saggy, or even break off.  The result is extreme weather: snow in Egypt, heat waves in Siberia.

As the Arctic ice cap melts, the stable temperatures which it provided to planet Earth for eons of time are replaced by heat waves, droughts, unprecedented hurricanes and typhoons, and massive wildfires.  The Arctic ice cap has long served as our heat shield, but we are willfully removing that heat shield.  We are even preparing, as the ice recedes, to drill for oil in the Arctic seas.  Oil which, of course, we will burn.

Profiteering from Arctic oil is our final suicidal madness.